Visitors are able to enjoy fusion cuisine from the Grand Duchy of Luxembourg, influenced by flavors from all around the world as well as Luxembourg’s international community.

This broad gastronomy section of the Luxembourg Pavilion managed by the Michelin-starred chef Kim Kevin de Dood will showcase Luxembourg’s excellence in this field while reflecting its diversity.

The Story of Schengen 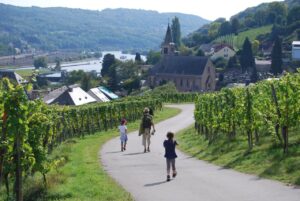 Idyllically located at the border triangle of Germany, France, and Luxembourg, the wine-making village of Schengen is a synonym to a zone where 26 European countries decided to abolish their internal frontiers.

Signed on June 14th, 1985, the “Schengen Agreement” became the soil for the free and unrestricted movement of people within the Schengen Area. For those citizens who would need a travel permit, one single visa application (called the “Schengen_Visa”) is enough to travel within 26 countries.

The idea of open borders is also reflected in the gastronomical creations by Michelin-starred Kim Kevin de Dood. Inspired and influenced by Luxembourg’s international community and diversity, he created a uniquely refined menu that allows you to enjoy modern Luxembourg on a plate.

The Chef & his team 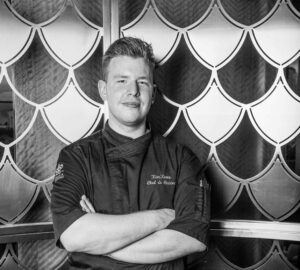 The Luxembourg Pavilion is one of the very few pavilions at EXPO 2020 Dubai with a Michelin-starred chef.

Kim Kevin de Dood, the main Executive chef of Saint-Pierre Restaurant in Singapore, is managing the Schengen Lounge with the support of the Gastro section partner Jumeirah Group which brought forth two experienced sous-chefs, Mario Coelho and Sam Vossen to be Kim Kevin de Dood sous-chefs at the Expo 2020.

To aid in providing first-class service, 31 students from École d’Hôtellerie et de Tourisme du Luxembourg – EHTL is also a part of Chef Kim Kevin de Dood’s team. The catering expertise of the EHTL was called upon since the early stages of the creation of the gastronomic section.

The concept of having students working directly under the leadership of the renowned, Michelin-starred chef emerged as an idea of having them complete the part of their practical work during the EXPO 2020 DUBAI.

Spread over the three periods, young culinary talents from Luxembourg work side by side with Kim Kevin de Dood. They put together carefully chosen recipes during the World Fair, but also welcome and serve visitors of the Schengen Lounge.

In addition, four guest culinary guest cooks were selected to contribute to the versatility of the gastronomic offer at the restaurant. They prepare dishes alongside Chef Kim Kevin de Dood during the Luxembourg Week (20-25 January 2022) – at the EXPO 2020 in Dubai.

These esteemed chefs also developed their signature menu, which will be available to the guests as a special on the Dinner Menu for 45 days during the Expo. 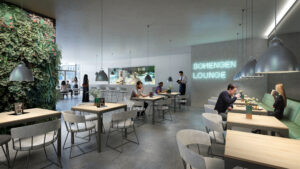 Schengen Lounge is occupying a privileged position on the ground floor of the Luxembourg Expo 2020 Pavilion. It is open from noon to midnight (12.00h-0.00h) during the six months of the World Expo, expecting to contribute to the delightful Luxembourgish gastronomical experience of approximately 360 guests daily.

As the highlight of the Expo 2020 gastronomy section, Schengen Lounge has a contemporary design aligned with the artistry happening on the plate.

The restaurant features an open kitchen, enabling visitors to enjoy the preparation of the dishes by watching chefs in action first-hand.

The restaurant was developed in collaboration with EHTL, and the prestigious Jumeirah Group is a partner in managing the restaurant on-site. The group provided two experienced sous-chefs to help manage the restaurant in a way that stays compliant with the local regulations.

A total of 80 guest seats is available to the visitors.

Schengen Lounge hosts up to 40 people inside, and the same number of seats will be available outside. 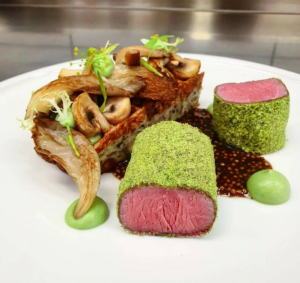 The menu available to the visitors of the Schengen Lounge has been carefully devised to reflect the diversity and multiculturalism of Luxembourg at the World Fair.

The innovative approach of the Michelin-starred chef and his team, provided a variety of fusion-inspired recipes along with the broad offer of traditional dishes, delivering a high-quality experience to the guests.

Visitors are able to enjoy a versatile offer of dishes, including vegetarian and gluten-free options.

Be ready to enjoy culinary delights such as green dill oil and fennel, roast lamb served with potato waffles and mushrooms, Trout Meuniere with a ginger-infused cream.

A resourceful range of desserts exists within the menu selection. Visitors can taste the Dessert Trolley, choosing two kinds of pastries among the ones marked in the Menu, or simply enjoying a plated dessert such as Modern Tiramisu.

Apart from having several types of coffee and soft drinks set to complement the food choice brought by Chef de Dood and his team, a special selection of Luxembourgish wines and crémants (sparkling wines) is also accessible at the Schengen Lounge restaurant during the EXPO 2020 DUBAI.

The wines from Luxembourg are mainly consumed locally and not often tasted outside of the country and the region. As one of the exclusivities for the visitors of the Luxembourg Pavilion, a selection of five wines and one crémant can be ordered at the Schengen Lounge.

It is also an opportunity to showcase the passion and winemaking artistry of the winegrowers of the country, alongside the culinary masters who will represent the best of Luxembourg’s gastronomy at Expo 2020 Dubai.

It is our pleasure to welcome you to the Schengen Lounge, an open space that transcends borders at EXPO 2020 DUBAI. We wish you a pleasant gastronomical journey. Gudden Appetit!