Since the very first World Exhibition in London in 1851, the Grand Duchy of Luxembourg participated in the event every time the exhibition theme matched the country’s DNA.

Dubai 2020 will thus mark the country’s 24th participation in this type of fair.

A look back at the history of Luxembourg’s participation in the World Exhibitions:

Luxembourg participates in this first ever world exhibition as a member of the “Zollverein” (customs union with Germany).

In Hyde Park, an imposing and impressive palace, the Crystal Palace, is built specially for the occasion.

Luxembourg is represented by 6 exhibitors, including the shoe manufacturer J. Wemmer, bootmaker of the King Grand Duke, who will be awarded a medal. 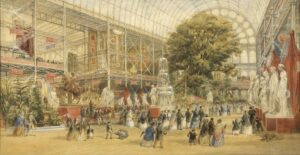 For the first time, Luxembourg has its own exhibition commissariat. Prussia wanted to group the products of the Grand-Duchy under the Zollverein, but Luxembourg manages to display its coat of arms and flag on its stand, the one of the King of Hollande with the inscription « Grand-Duché de Luxembourg ».

Luxembourg participates with six exhibitors and a stand located between those of the Netherlands and Belgium.

Luxembourg industrialists show great interest in participating in this exhibition with the aim of increasing their exports to the United States. The glove-makers A. Charles & co and G. Meyer, the Société des Mines de Luxembourg (a mining company) and the forges of Burbach are among the exhibitors.

Luxembourg shares a pavilion with Monaco, San Marino and Andorra, which incorporates architectural elements from these four small European countries.

Luxembourg occupies a stand of 600m2 and a garden of 1,000m2 with 48 exhibitors presenting the country’s booming mining and steel industry.

It is the first time that Luxembourg participates as an independent country. The P&T (now POST) introduces a project to equip Luxembourg with a telephone network.

Luxembourg is represented by 80 exhibitors, including the recent Dudelange factory, Moselle wines and the rose gardeners Souppert & Notting.

Luxembourg’s first participation with its own pavilion located on the Quai d’Orsay on a 40 x 10 meter ground, where the country built a wooden and plaster structure inspired by the Grand Ducal Palace and the Mansfeld Castle. 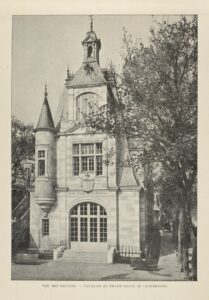 Luxembourg no longer presents itself as a steel country but is represented by 82 winemakers and 22 stone quarry operators. The country also exhibits Henri Tudor’s energy car, a mobile power plant designed to replace steam locomotives.

Luxembourg has an exhibition area of 500m2 inside the industrial halls and 400m2 in the gardens. The country presents steel, leather and wine products as well as roses together with the drawings of the new train station, which will be completed in 1913. 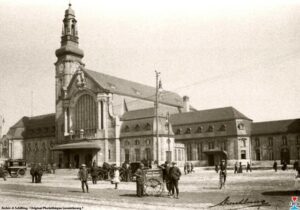 The frequency of exhibitions causing a feeling of weariness among Luxembourg industrialists, the country has no official participation in the Gent exhibition in 1913. There are however four unofficial participants, with the award list mentioning the rose gardeners Thill Frères from Ettelbrück and Gemen and Bourg from Luxembourg, as well as the house painter Joseph Treinen from Rodange.

Luxembourg participates with a 200m2 rose garden that is used as a national pavilion. A wide selection of Luxembourg’s contemporary creations is displayed at this « Exposition internationale des Arts décoratifs et industriels modernes ». 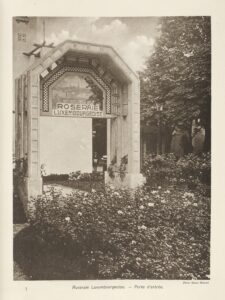 In addition to the steel industry, tannery, glove-making and tourism, Luxembourg is appearing for the first time as an international financial centre following the creation of the stock exchange and the vote of the Holding Act in 1929.

Luxembourg has a 2,100m2 building designed in the art-deco style by Georges Traus and Gilbert Wolff, which is the first in a series of imposing pavilions that the country will build for future exhibitions. Reliefs by the artist Auguste Trémont on both sides of the pavilion illustrate the country’s industry and agriculture. The building features the steel companies Arbed, Hadir and Paul Wurth S.A. and offers tourist information.

The pavilion designed by architect Nicolas Schmit-Noesen is the noblest, at least the most artistically accomplished of all of Luxembourg’s pavilions so far. The façade includes a large relief with the title « Vue panoramique de la Ville de Luxembourg », by Pierre Blanc. The main hall contains a 20 x 4.5 metre model of Luxembourg’s mining region. Commissioner : Léon Laval. 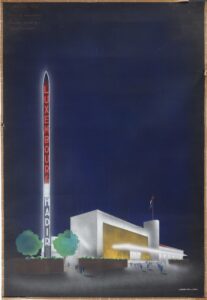 While the threat of war causes the steel industry to withdraw, no corporations are present in the pavilion. Michel Stoffel, president of the Cercle artistique de Luxembourg saves the situation by creating an exhibition entirely placed under the sign of tourism and art, with among others art works by Henri Rabinger, Jean-Pierre Beckius, Emile Probst, Joseph Meyers, Claus Cito, Lucien Wercollier and Auguste Trémont.

Luxembourg participates with a steel pavilion of 4,300m2 representing the steel industry. Inside, a model shows a futuristic vision of the development of the Kirchberg area. 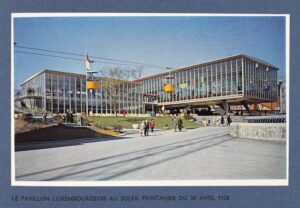 Luxembourg joins in the collective participation of the European Economic Community created in 1957.

After a 30-year hiatus, Luxembourg returns to the World Exhibition with a cubic glass and steel building designed by architects Paul Fritsch and Bodhan Paczowski. For the first time the country choses to exclusively use audio-visual media. Commissioner : Jean Hamilius. 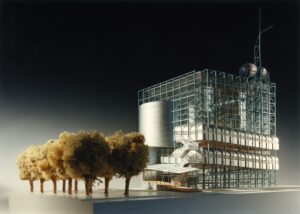 The Lisbon 1998 exhibition is placed under the theme « The Oceans, a Heritage for the future». Although located at 340 km from the sea, Luxembourg participates to pay tribute to the many Portuguese nationals who work in the country. This participation was designed by Jim Clémens. 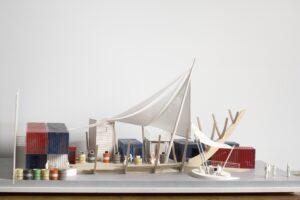 Luxembourg participates with a stand called « Luxembourg connects people – Planet Astra », with a 40% funding by SES and designed by architect Christian Bauer. The aim of the multimedia terrace is to reflect the modern information society. Commissioner : Johny Lahure. The stand attracts one million people.

Luxembourg participates with a highly acclaimed pavilion. Designed by the Luxembourg architect firm Hermann & Valentiny et Associés, the pavilion is made entirely from recyclable materials (steel, glass and wood). It is inspired by the translation of the word “Luxembourg” into Chinese, “Lusenbao”, which means “forest and fortress.” Under the theme “Small is beautiful too”, this pavilion illustrates the reality of the country and the people of Luxembourg.

For the time of the exhibition, the « Gëlle Fra », a sculpture by Luxembourg sculptor Claus Cito, moves from the city centre of Luxembourg to the front of the pavilion. The Chinese immediately adopt the “Golden Lady of Luxembourg” with more than 7 million visitors. After the exhibition the pavilion is relocated to another Chinese site to be used as a design school and a virtual reality lab. 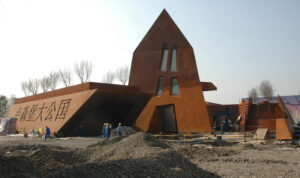